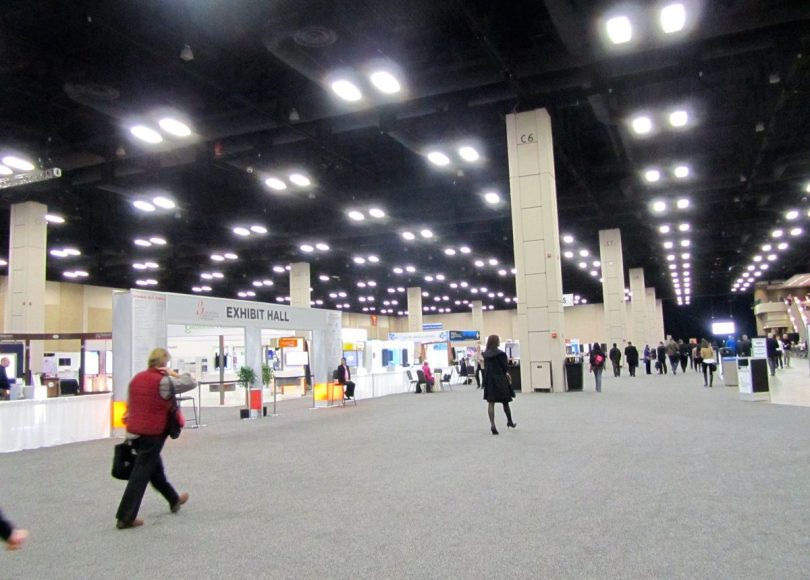 Innovative new approaches to breast cancer treatment that were featured at the 2014 San Antonio Breast Cancer Symposium could eventually have a big impact on the way breast cancer is treated.

Potential new treatment strategies are opening up as a result of recent advances in knowledge of cancer biology as well as improved understanding of how our immune system functions.  Technological advances are playing a big role too.

I attended a variety of presentations and events at the meeting, including general session presentations on study findings, educational sessions on basic science topics, and less formal “poster” sessions, where scientists were available to speak with attendees individually and answer questions about their research projects. I also attended a number of special sessions for advocates in which physicians shared their views on how research findings will affect treatment options for patients.

Here are several of the themes that I heard repeatedly in these different settings, and that summarize where breast cancer research seems to be headed based on what I learned at this year’s Symposium.

1. Immune system therapies are beginning to show early signs of promise for the treatment of breast cancer.

Researchers are currently investigating a variety of different strategies for harnessing the body’s own immune system to better fend off a developing or progressing cancer. A few new immune system therapies have already received FDA approval for other types of cancer, particularly for melanoma. And many possible new treatments, including vaccines, are in development.

Researchers pointed out that, compared with the 1970s, when there was also optimism about immune system treatments for cancer, we now have a better understanding of how the immune system works, and there are ways to exploit that knowledge.

One of the studies presented was an early stage clinical trial of an immune system bolstering drug called pembrolizumab (Keytruda), which has already received FDA approval for the treatment of melanoma. This drug works by blocking cellular processes that interfere with the immune system. The effect has been described as “releasing the brakes” on the immune system. In those patients for which the drug works, it can be effective for a very long time.

In this small study of 32 patients with advanced triple negative breast cancer, 5 of the patients had their tumors shrink, including one whose tumor disappeared completely, and another 7 had stable disease. The results were considered encouraging enough to take this treatment forward for further study. A Phase II trial is planned for the first half of 2015. Researchers also plan to pursue this treatment strategy for other breast cancer subtypes.

2. Treatments will increasingly be selected, at least in part, on the basis of specific mutations present in a patient’s tumor cells rather than solely accordingly to the handful of breast cancer sub-types we’re familiar with today.

Inherited genetic mutations such as the BRCA1 and BRCA2 mutations increase the risk of developing breast and ovarian cancers, but these mutations are present in only 5-10% of breast cancer cases. There are as  many as 100 or more different non-inherited mutations that occur in breast cancer, with a fairly small number of these mutations being very common. These genetic alterations go by an alphabet of names including PIK3CA, TP53 and MYC.

Researchers are working to develop new treatment strategies that target breast cancer cells with these frequently occurring mutations. At the same time, technology has now made it possible to “sequence” any individual patient’s tumor cells to determine which mutations are present.

The goal eventually would be to personalize each patient’s treatment based on the specific mutational profile of their tumor cells. In the meantime, there are ways in which tumor genome sequencing can benefit patients right now. One is by possibly identifying mutations that would make a patient’s cancer resistant to specific therapies, enabling the patient to avoid treatment that would not be effective for them. Another is by matching patients with clinical trials studying new therapies targeted to the mutations present in their cancer.

3. Combinations of targeted therapies, possibly including immune system therapies, will likely be found to be more effective than single-drug targeted treatments.

The challenge of the targeted therapy approach is that, within one patient’s tumor cells, there are often many different genetic mutations. The surrounding cells can harbor mutations as well, contributing to the disease’s progression. This a problem because cells with mutations other than those being targeted by therapy may be resistant to the treatment and able to develop into a new tumor.

The hope is that researchers will eventually home in on a relatively small number of critical mutations that can be targeted simultaneously to put a stop to the cancer. Researchers are working to identify those critical mutations. Many of the mutations being studied are common across different types of cancer.

4. The way in which clinical trials are conducted is beginning to change along with the new types of experimental treatments.

At a meeting for advocates, Dr. Carlos L. Arteaga, President of the American Association for Cancer Research, contrasted the old “one size fits all” type of clinical trial, in which large numbers of patients are enrolled, with the newer, more streamlined approach in which fewer patients are enrolled, but the likelihood they will be helped by the treatment is increased because their tumor’s characteristics are matched to the treatment being studied.

Dr. Arteaga described the clinical trial process as follows: (1) a patient’s tumor is sequenced; (2) a mutation for which there is a corresponding experimental treatment is discovered; (3) the patient is matched to a clinical trial for the relevant treatment or combination of drugs. If the patient’s cancer does progress, it is often possible to do a new biopsy and start the process again, revealing another actionable mutation.

One of the key problems right now, according to Dr. Arteaga, is that many patients who could benefit from this approach are not having their tumors sequenced, based on a sense that it’s still too early and there aren’t enough drugs available to make it worthwhile. It was his view that everyone has the potential to benefit now, even if it’s through enrollment in a clinical trial rather than by means of an already approved therapy.

5. New cancer drugs are incredibly expensive and this increasingly raises the question of whether patients that could benefit from new treatments will be able to have access to them.

New treatments can’t help patients if they can’t access them and the very high prices on the newer drugs are becoming a big problem. I wrote about this issue in a recent post, “Why Do New Cancer Drugs Cost So Much?”

The cost of tumor sequencing, while it has come down a lot, is still quite high. Covering this cost as well as the cost of multiple medications could well be prohibitive for many patients–even for those with good insurance coverage, given that out-of-pocket costs are themselves increasingly very high.

There are lots of good summaries of this year’s SABCS available. If you would like to learn more, here are a few, listed by the subject areas covered:

Related Posts
San Antonio Breast Cancer Symposium 2013: What Did We Learn?
Cancer Genome Studies: How Will They Help Patients?